On the final Friday of every month, Live Baltimore heads out of the office and into one of Baltimore’s 278 neighborhoods. Each month, we love what we find! April was no different. 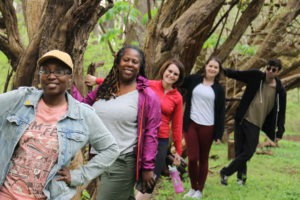 Our April outing took us to the third largest urban wilderness park in the country. The Live Baltimore team visited Gwynns Falls/Leakin Park. The two parks together encompass more than 1,200 acres of contiguous parkland and make up the largest park in Baltimore City!

The Carrie Murray Nature Center is a Baltimore City Recs and Parks facility that serves about 30,000 visitors a year from individuals and families to school, church and camp groups. It offers outreach programs as well as summer camps, public programs and special events for kids and adults of all ages to experience the benefits of spending time in nature.

The center is named for the late Carrie Murray, mother of Oriole Eddie Murray, who donated the funds to create the facility.

“We have 272 parks (in Baltimore) but these wooded parks are really special for kids,” Mary said of the value of spending time in nature.

The park’s amenities, including biking, hiking and walking trails, are also easily accessible to the 22 Baltimore City residential neighborhoods that surround the park, including Windsor Hills, Dickeyville, Franklintown and Hunting Ridge, she added. Visitors enjoy access to athletic fields, birdwatching, community gardening and miniature train rides, concerts and the park is also the site of the annual Baltimore Herb Festival, held each spring.

“A lot of people think they have to go out to Patapsco or Oregon Ridge to experience something like this but you don’t even have to leave the city!”

After stopping at the nature center, we continued out into the great outdoors for a short staff hike to the Orianda House. The 1856 estate built by Thomas Winans (son of the famous Baltimorean inventor who built advanced coal-burning locomotive train engines) is now part of Outward Bound’s campus within Leakin Park.

Outward Bound is an international movement with a mission is to change lives through challenge and discovery. Founded in the 1940’s, the organization offers leadership and educational development courses using the wilderness as its classroom.

“The idea is that our students are so much more capable of what they’re told or recognize,” Director of Development Leanna Powell said. “When you’re in a hard environment you get to push yourself to the limit and figure out what those limits are.”

The top floors of the Orianda House are maintained as field staff housing while the first floor is used for staff training and remains open to the public on the second Saturday of the month.

Leanna allowed us to take a peek inside where we climbed a tight, spiral staircase leading to the home’s cupola. From there, we were treated to a fabulous view of the surrounding, picturesque parkland. 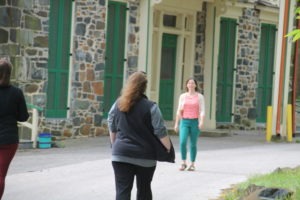 “All of us who work here feel a huge devotion to this park,” she said. “That strengthens my idea of what it means to be a city resident. To have this in Baltimore and have people not know it— I feel it’s my mission to remind people of this place.”

We got a real kick out of imagining trying out some of the more difficult elements of the course and hope to return one day as a team.

After getting a feel for the many things Outward Bound does within the park, we parted ways and continued our hike back to the nature center past the many art installations scattered along the path. Of course, we had to stop for a few photo opps.

It was so refreshing to spend a morning in nature and we all agreed that it would be nice to make a better habit of trying to spend more time outdoors!