Tour Historic Marble Hill With Us!

On the final Friday of every month, Live Baltimore heads out of the office and into one of Baltimore’s 278 neighborhoods. Each month, we love what we find! October was no different.

Our day started at The Avenue Bakery (“Home of Poppay’s Famous Rolls”) in the Druid Heights neighborhood of Old West Baltimore. 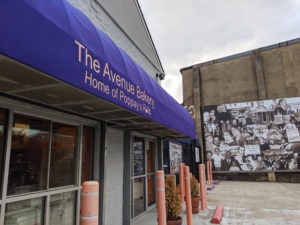 The bakery opened in 2011 in an effort to bring people back to Baltimore’s Historic Pennsylvania Avenue. In it, “Poppay,” the name bestowed upon owner Jim Hanlin by his granddaughter, churns out delicious yeast rolls and much more in a space adorned with trail markers and pictures explaining Baltimore’s rich African-American history.

“I have this belief that if we want to change Baltimore we have to focus on West Baltimore,” explained Poppay, while telling us about his decision to open in the area. Poppay told us about Baltimore’s history as “the heart of the Civil Rights movement.” The site of one of the nation’s first anti-segregation counter protests is right down the street at Read’s Drug Store, he said.

“This area also used to be the entertainment center with jazz, clubs and other live music,” he said. “We try to bring that back by hosting Jazz in the Courtyard the first Saturday of the month from May to September.”

“This is one of the most historically significant African-American communities in the country,” Marion said. “People think of Harlem, but the economic health and wealth was here in Baltimore.”

Marion told us that the Pennsylvania Avenue corridor is part of the National Register of Historic Places and is home to many civic monuments that relate to Baltimore’s historic African-American community. It has served as home to many historic figures known for being firsts or greats in their industries and causes.

With that in mind, we set off with Marion to meet Johns Hopkins from Baltimore Heritage for a tour focusing on that very history. The nonprofit organization is a historic and architectural preservation organization which hosts frequent walking tours of Baltimore neighborhoods, districts and famous buildings. By bringing awareness to historic places and landmarks throughout the city, it hopes to preserve both the stories of the past and the buildings which made that history possible. 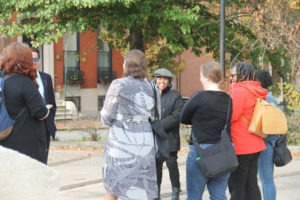 We met at the Key Monument in the Madison Park neighborhood to start off our tour of Historic Marble Hill and Old West Baltimore. The area west of Bolton Hill and including parts of Upton is usually lumped in with its neighbors but includes grand, historic rowhomes, large religious buildings and—at its eastern edge—the long, grassy park we were standing in. Homes ranged in size but some easily surpassed the size to those of its neighbor to the east without the price tag.

We left the park and set off for the first stop on our tour.

Immediately across the street we found the home of civil rights pioneer Lillie Mae Carroll Jackson. Jackson and her daughter, Juanita, helped organize the City-Wide Young Peoples Forum, which led the Buy Where You Can Work campaign. Along with the forum’s other members, they encouraged Baltimore’s African-American community to shop only at businesses where they could work, thus boycotting businesses with discriminatory hiring practices. The campaign’s success led to similar protests in other cities around the country.

“We built the foundation that the Civil Rights movement used,” Johns said.

We continued into Madison Park where we paused at Douglass Memorial Community Church to hear about the late Pastor Marion Bascom. In 1963, Bascom helped organize a peaceful protest at the segregated Gwynn Oak Amusement Park in Woodlawn. The carousel ridden by protestors is now on the National Mall in Washington D.C. 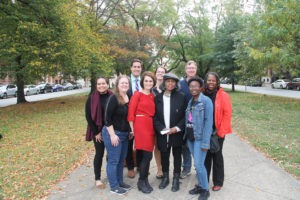 Everywhere we turned was full of history. On Division Street, we passed Public School 103, where Thurgood Marshall attended school from 1914 to 1920 and a former law office on Druid Hill Avenue where Clarence Mitchell worked on cases for the NAACP.

“You think of the 50’s and don’t necessarily think of Baltimore but we were doing ‘civil rights’ here since right after the Civil War. You couldn’t have Rosa Parks or Thurgood Marshall without Lillie Carroll Jackson or Harvey Johnson.”

After our walking tour we met back at the park for a quick photo and final thoughts.

Though we always learn something new to love about our neighborhoods on Final Fridays, we all agreed that we were walking away this time in particular just a little bit wiser and a little more in touch with Baltimore’s rich history.