Tour the Hackerman House With Us!

On the Final Friday of every month Live Baltimore heads out of the office and into one of Baltimore’s 278 neighborhoods. Each month we love what we find. This month was no different.

With a Trolley Tour coming up at the end of the month, the Live Baltimore team chose to go a different route this January. Instead of touring a neighborhood as usual we hoofed it up the road just a few blocks from our Downtown office to the Walters Art Museum in Mount Vernon. The free-to-the-public museum recently re-opened an attached 19th-century mansion at 1 West Mount Vernon Place (also known as Hackerman House) following a $10.4 million multi-year renovation. 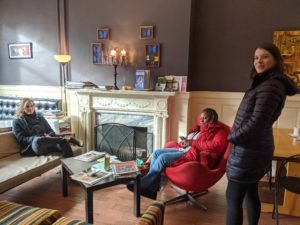 We stopped at Koffee Therapy on Franklin Street for caffeine and a few quick bites. From there it was time to meet Walters Art Museum docent Judy. Docents lead free, conversational tours of the the museum in multiple languages, and it’s so neat that we have access to these tours and a world-class museum right in our backyard!  We entered the museum where Judy told us a little about the property. Though the Hackerman house is named for its last owner before the property was gifted to Baltimore City for public use,  three families actually lived in the property over the course of its use as a residence.

Judy used an app created by the Walters to show us historical photos showing the interior of the home over the years. The residence was originally built for the family of Dr. John Hanson Thomas. After Thomas’ death, the philanthropist and founder of the Walters, Henry Walters, wanted to purchase the home to expand his art gallery, but it was scooped up by the Jencks family. 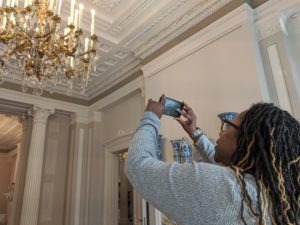 We walked out of the museum into a patio/sunroom where Judy told us that the Jencks family enclosed the patio to entertain and create a separate entrance for their servants and slaves. That family lived in the home until the 1950’s. Following the death of both Mr. and Mrs. Jencks, the house fell into disrepair until it was purchased in 1963 by a local businessman, Harry Gladding, who fixed it up. When he died in the 80’s, late philanthropist and Whiting-Turner founder Willard Hackerman bought the property to prevent it from being split up into commercial space or multiple residences, as is the norm throughout much of the neighborhood, and donated it to the City in 1984.

The Walters used the building as a gallery for Asian art from 1991 until the latest renovation began in 2014. Those items were moved after this most recent renovation, completed in 2018, and visitors are now given the chance to tour the home, learn about its history and view a collection of alternating exhibits.

Judy led us from room to room, giving us tidbits of history and showing us historical photos to compare to our present-day surroundings. The home retains original chandeliers (which took six months to restore!), an ornate Tiffany glass skylight, ironwork and Greek temple columns. 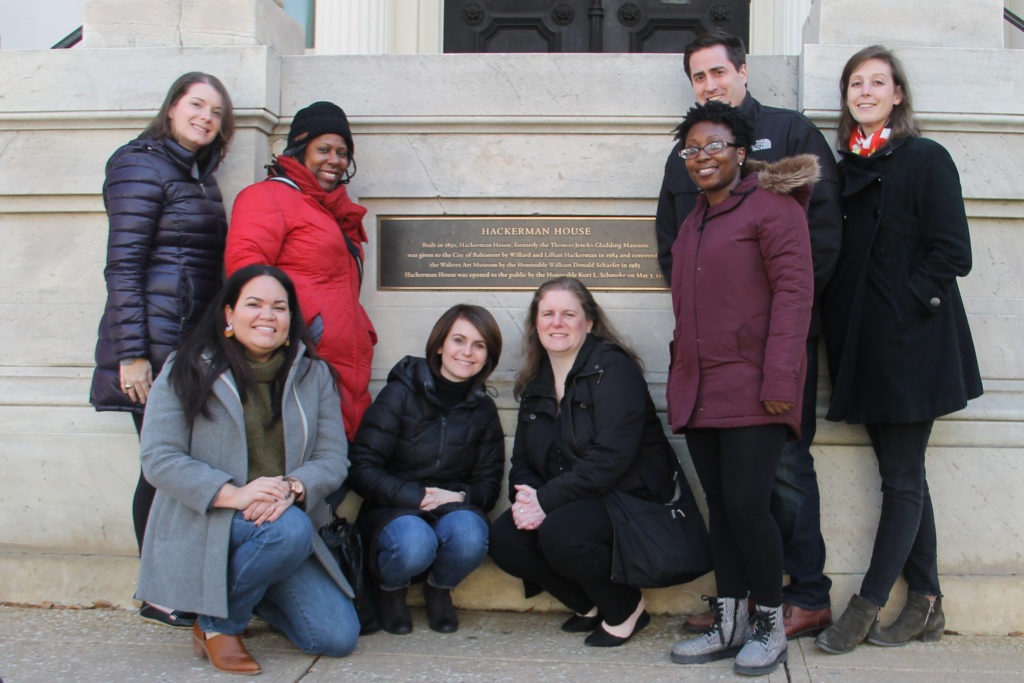 Following our walk through the property, it was time to head back to the office. We took a quick group photo before setting off back down Charles Street. We couldn’t be more grateful for the tour and each exclaimed how lucky we are to be so close to an institution like the Walters!

Interested in learning more about living in Mount Vernon? Read more about it on our Neighborhoods page.