On the final Friday of every month, Live Baltimore heads out of the office and into one of Baltimore’s 278 neighborhoods. Each month, we love what we find! March was no different. 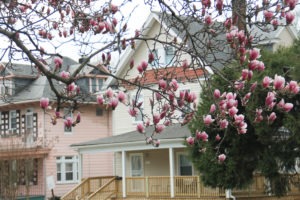 On its face, Hanlon-Longwood — or just “Hanlon” for the long-term residents — is an established neighborhood in Northwest Baltimore City rich in history and architectural design. The community of grand 1920’s to 1950’s homes borders the west side of beautiful Hanlon Park. Though the homes are an endearing neighborhood fixture, once you get to know its charming neighbors it’s evident Hanlon-Longwood offers much more to the residents who choose to call it home!

“This is a wonderful neighborhood with lots of variety in the housing stock,” said Pat Kroger, who has lived in the neighborhood for 13 years. “There’s an excellence and elegance here. I appreciate the greenery, spaciousness and the character of the homes.”

We started our Final Friday at one of those beautiful, character-filled homes — the residence of Ernest and Debra Gayles. The couple has spent almost a decade in their three-story Four Square, first as renters and currently as owners.

After living in the area as children, the couple said the decision to purchase the home they were renting was a no-brainer. When the family friend the Gayleses were renting from decided they no longer wanted to be a landlord, Ernest and Debra Gayles immediately said yes to buying!

At around 3,800 square feet with 10 bedrooms and multiple living spaces, the Gayleses’ home is spacious but needed some modern updates. A 400-year-old painting that had been installed by the original owner into their dining room wall was carefully removed to prevent structural damage. The kitchen needed new appliances and cosmetic updates and an old, unused staircase in the back of the 100-year-old house was removed. You never know what you can find inside of these historic homes, and we really enjoyed getting to see the before and after photos!

The Gayleses were able to use both the Buying Into Baltimore incentive and a Healthy Neighborhoods home improvement loan toward their purchase allowing them to customize the home to their liking and making the neighborhood even more affordable.

“On the outside our homes may be the same but, on the inside, they are so architecturally different,” Ernest Gayles said.

After coffee and introductions, we moved into the home’s main family room to hear from both past and present residents about Hanlon-Longwood. Neighbors told us the community is a hidden gem. Often overshadowed by neighboring Ashburton, it offers many of the same amenities but boasts beautiful homes at a fraction of the cost. 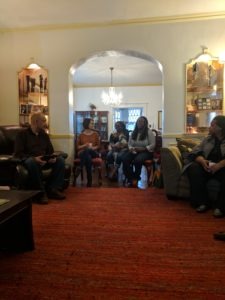 “People don’t recognize Hanlon for many of the same things other communities have, but there’s a tremendous amount of flavor and a tradition of excellence for the people who live here,” Kroger said.

Over the years, some homes have fallen into disrepair, but the community is experiencing a recent uptick in renovations with many homes being restored to their former glory.

Hanlon Improvement Association Vice President Linda Batts, a lifelong resident of the neighborhood, said the community association is currently working on better connecting neighbors and advocating for them in ongoing renovations to Hanlon Park.

Batts’ family purchased her current home in 1951. She remained in the house throughout a career as a civil rights executive in Washington, D.C. and is now retired, giving her more time to dedicate to the community.

Having residents from a variety of professions has added to the diversity of the neighborhood, she said. Ravens employees, D.C. commuters, librarians, realtors, educators, historians and doctors all call the neighborhood home.

Nearby Hanlon Park, named for the manager of the Orioles from 1892 to 1898, is approaching its centennial and neighbors have high hopes for a full-blown collaboration. Batts said the association is working to engage the Orioles in a celebration and they hope a living member of the Hanlon family will join them too. 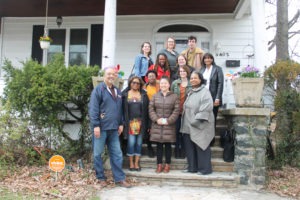 After hearing about the history of the neighborhood we set off to take a peek inside a home undergoing renovations next door. We ooh-ed and ahh-ed over the modern updates going in and the historic architectural elements that remained on the outside like the large front porch and arched entryway. Ernest Gayles pointed out recent renovations from a second-story deck.

From there, we set off on a walking tour of the community. Ernest Gayles pointed out the variety of housing stock the neighborhood has to offer. Though there are many Tudors, Colonials and Four Squares, the neighborhood also has single-story ranch homes and an apartment complex.

As we turned the corner to approach 46-acre Hanlon Park, we were treated to the most amazing view of the Downtown Baltimore skyline. Each year, residents gather on top of the park’s highest point to view the Fourth of July fireworks at the Inner Harbor without ever having to get in the car. It was truly a magnificent view!

Interested in learning more about Hanlon-Longwood? Read more about it on their neighborhood page.